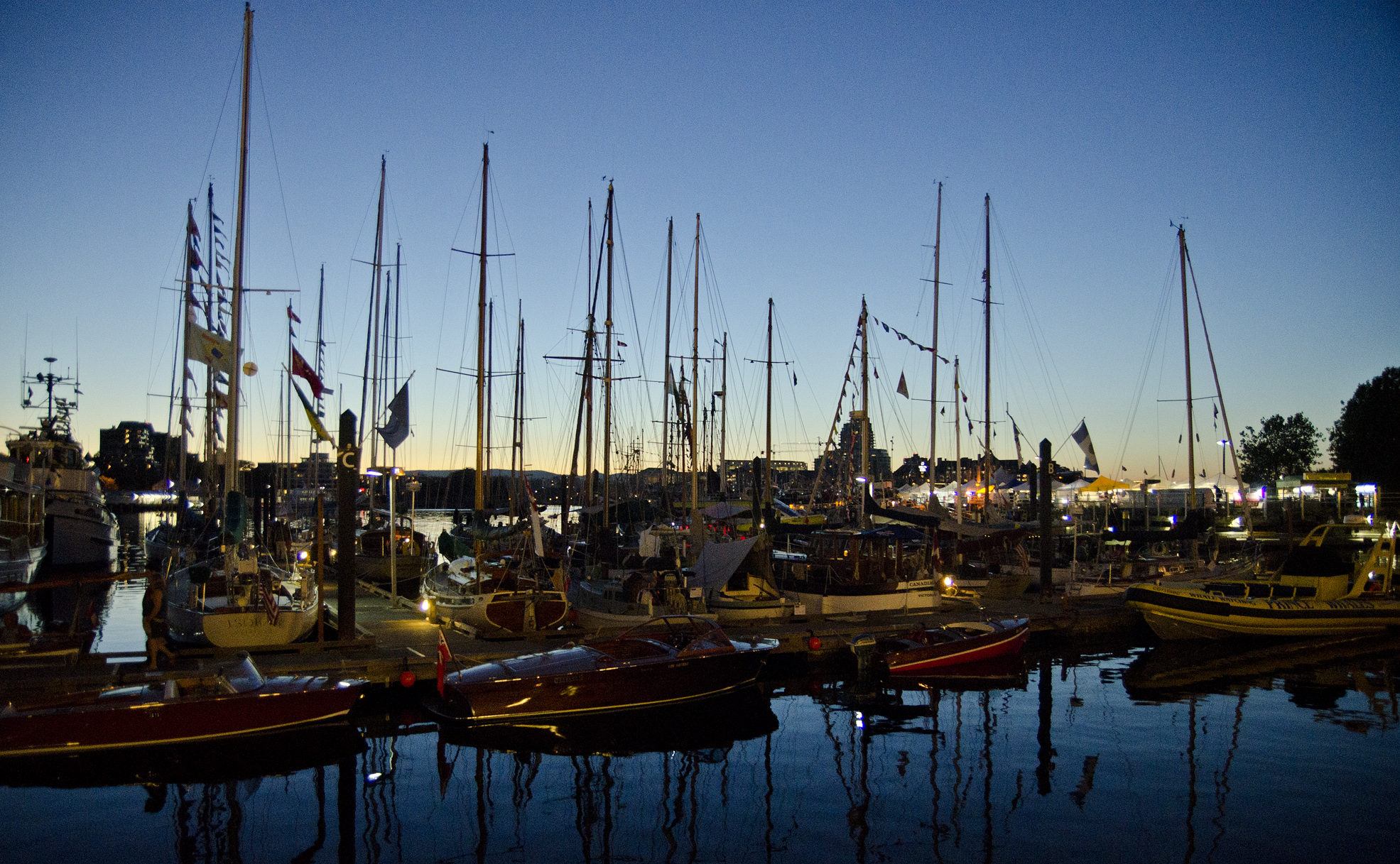 It’s been a month since boat show season ended in the Pacific Northwest. Some of you are hopefully still on the water, while others are buttoning down for the winter.

Wait, did I say winter? It can’t be! Forget that – it’s still glorious fall in the PNW! You still time to get out on the water if, like me, your boat is waiting for you but you only put the sails up … once… and haven’t actually gone sailing yet. (My excuses are pitiful. Believe me, I know I do a disservice to anyone who lives in the prairies when I let a whole summer go by without sailing. If there’s one thing DOROTHY has taught me, it’s that experiencing life with a boat is better than without!)

So let’s think of kinder, warmer things, like boat shows! We had a fantastic time at this year’s Victoria Classic Boat Festival, the 40th annual. While nothing could make up for the absence of John West, a key founder and integral, energetic part of the festival over its four decades, the sun shone bright on the docks full of beautiful boats and interested visitors.

It was the first year the Maritime Museum of B.C. took the helm and led the organization and programming, and they did an admirable job running the show. Congratulations!

DOROTHY was on hand in spirit, if not in physical form. As it was her 120th anniversary, we celebrated with cake in the hall of the MMBC, and a hearty Happy Birthday.

To make sure she was present “on the docks”, we hosted a table Saturday and Sunday with promotional materials, photographs and new 2018 calendars and anniversary T-shirts for sale. I was delighted that former owner Angus Matthews was able to join me on Sunday to chat with people on the docks.

It was interesting to hear the response when we asked people whether they had heard of “Canada’s oldest sailboat”. Most said, no, but were intrigued. Then we’d ask where they were from and roughly half the time, they were from Victoria! I realized there are two distinct groups in this small but passionate boat community: those who have been following the Dorothy adventure closely, and those who don’t know anything about her story at all.

I feel we have a lot of work to do in getting the Dorothy story out there. If you want to help with our mission of keeping her memory alive while the committee continues to raise funds for the rest of the restoration, you can help! We still have 2018 Anniversary Calendars for sale, with images ranging from the MMBC archives, her sailing in the 1920s-40s and 1980s, contemporary photos in Tony Grove’s shop, and even an exclusive shot of her from the Langley family that has never before been released to the public.

Or, get our NEW T-shirt (Maroon and Heather Grey) with her anniversary dates 1897-2017. Send one to your friends, family members, or enemies, and tell them the story of DOROTHY. Or get an art card for Christmas mailouts, we have 6 different beautiful art cards. Email me at dorothysails@gmail.com for prices and orders. Christmas is just around the corner!

After costs, proceeds are split between the restoration fund and the documentary, Between Wood and Water.

For our Victoria boat show round up, the best thing from my perspective was the raft of forestry boats and workboats, most from British Columbia but a few from down south. I love their stories.

I was intrigued to find out that restored B.C. forestry boats outnumber U.S. boats about three to one. One notable exception is the 90-year old TEAL (image up top) which has a rich history patrolling the Alaskan coast and is now docked at Friday Harbor, WA. She won Best Conversion.

It seemed like there were less sailboats than usual – perhaps because ORIOLE and MARTHA were missing (and perhaps it’s my biased eyes that want to see sailboats everywhere!) – but there were an amazing representation of all kinds of classic boats to grace the docks.

Here were some of the awards handed out:

The second best thing about the festival was hanging out with our friends Eric and Steve from OFFCENTERHARBOR.com. They were doing double duty as boat oglers and storytellers, getting some juicy bits on their favourite boats in the PNW. We love OCH videos, and if you haven’t checked them out yet, you should definitely subscribe because they feature not only the hottest boats, but the best stories on people making and restoring them.

Look for them to feature PACIFIC, MESSENGER III and STITCH – all workboats of some kind – in the coming weeks.

So that’s it for our boat show season – how was yours? Did you participate? Drop us a line or write a comment if you have a story to tell. Because after all, next to an insane desire to drop 1000s of dollars on our beloved vessels, the stories we get to tell about them is the next best reason to own them, right?

If you have friends, neighbours or family members that don’t know about Canada’s oldest functioning, Canadian-made sailboat, consider giving them a Dorothy-related gift this year and helping us spread the word.

Thank you Friends! And happy sailing!