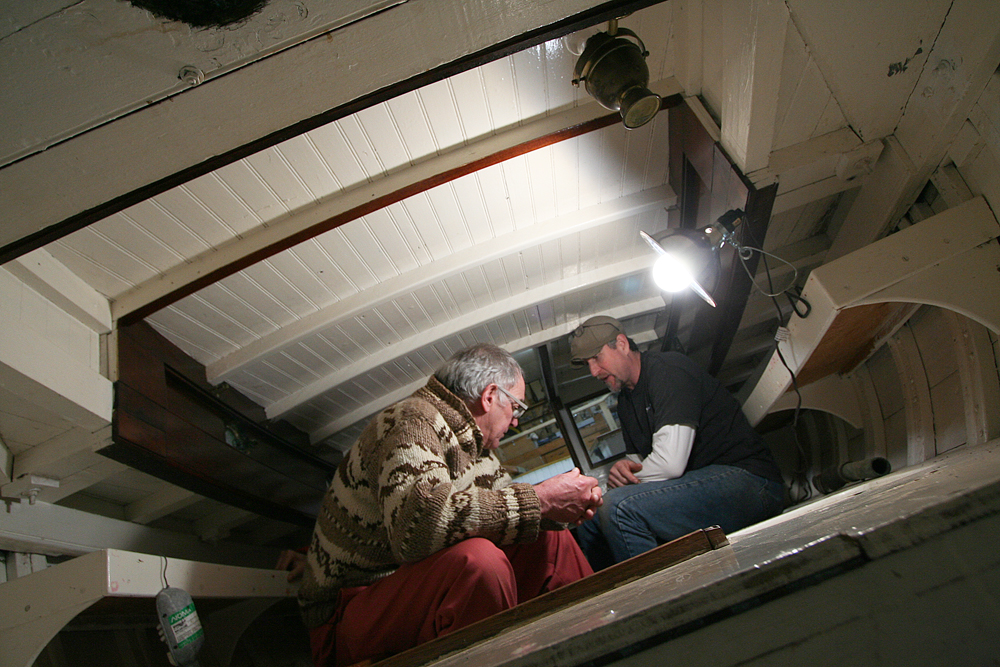 By Between Wood&Water January 29, 2013 No Comments

In early January, trustees John West and Eric Waal from the Maritime Museum of B.C. arrived on Gabriola to discuss Tony Grove’s discoveries regarding Dorothy. Tony had conducted an exploratory in late December which revealed the cause and extent of the century-old boat’s issues, and the trustees were about to hear the verdict, and to deliver their own about the next steps for the restoration.

As representatives of Dorothy‘s owner and ultimate caretaker, the Museum, and as those who know the most about her file, West and Waal will be significant voices in the documentary BETWEEN WOOD AND WATER. (I call them “the Bulldog” and “the Greyhound”.) It was Eric (above, at right) who first voiced concern over the fact that Dorothy‘s legacy fund was being depleted by storage fees, and doggedly set about bringing attention to her future. He convinced West (at left) to return to the board and between the two of them they have developed a strategy to get the old girl back into the water.

That strategy happily led to her being trucked to Tony Grove’s Gabriola island shop, and allowed this documentary team to jump into the mix. (Dorothy‘s restoration – a compelling storyline that could be followed in real time – combined with her launch at the 2013 Victoria Classic Boat festival, which gives her story a suitably dramatic ending, proved an irresistible combination to this producer!)

On December 20th we documented Tony removing Dorothy‘s garboards, as written up in this previous post. So what conclusion did he draw about her condition? Is she doomed beyond repair or can she be saved without too much effort? You can read Tony’s summary in his own words at his blog post here. To keep this short I will quote his ultimate recommendation to the Museum:

“I basically had two suggestions: the first, and the cheapest, would be to put Dorothy back together with some new wood and floors and some deliberate caulking below the waterline; the second is to wood the hull, reef all the seams, repair any planking or damage, refasten where possible and re-caulk her whole hull.

The first option would allow her to sail away safely, but is not addressing her age-born ailments and she would have to be redone again possibly in a few years, or at least have ongoing heavy maintenance. The second option, which I feel is the best for her and which John and Eric prefer as well, is wood the hull (strip of all hull paint), reef all the seams, repair any planking or damage, refasten were possible and re-caulk her whole hull. At the same time we should strongly support the stem and stern to help minimize hogging, and in the end when all put back together possibly help correct any hogging which has occurred over time.” – Tony Grove

And so it was decided that the old girl will undergo an extensive restoration  – as extensive as the Museum can raise the funds for – this coming spring and summer. Tony estimates it will take approximately double the number work hours that was originally anticipated, but since it will have to be done at some point in her near future, both West and Waal decided that it might as well be done now. As the saying goes… no use putting off til tomorrow what can be done today.

For the purposes of the film, we continue to document critical points but won’t start principal photography until mid-March, when Tony actually begins her restoration. We continue to look for a broadcasting partner for the story and have some interesting possibilities, but no confirmed partners yet. Still, we believe that Dorothy is such an intriguing way to explore B.C.’s coastal history that her story will find a way to an audience, somehow. She has waited a long time for her moment to shine, and you can be sure we will be there to capture it!