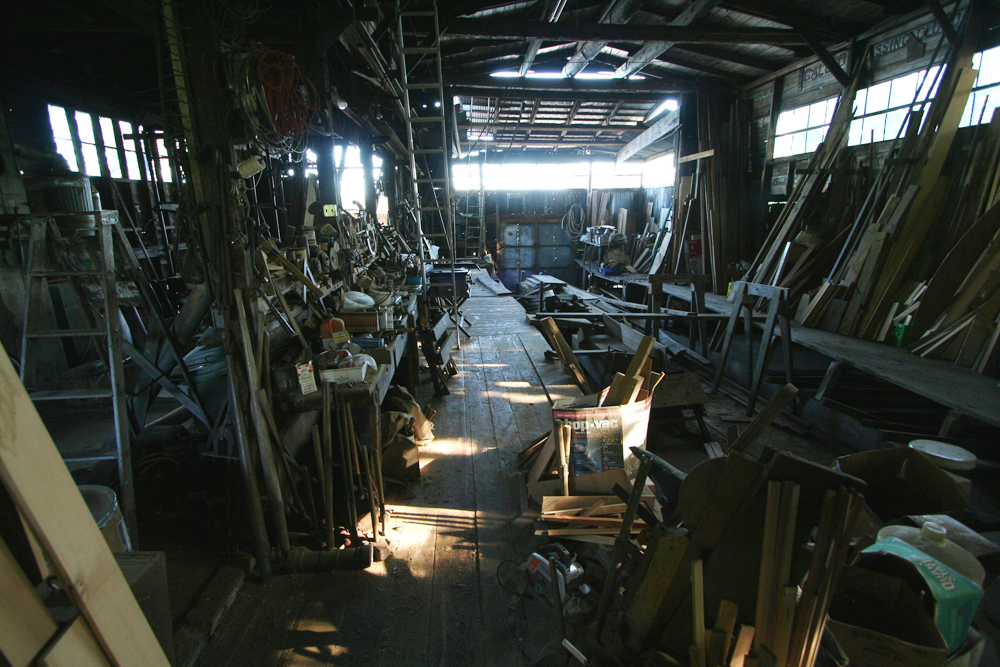 A surprise shoot for spring

On Thursday this week, Producer Tobi Elliott grabbed camera and gear for an impromptu filming adventure as Dorothy‘s restoration expert, Tony Grove, headed to Victoria B.C. to meet master caulker Ted Knowles. Knowles had worked with boatbuilder Brian Walker for years, eventually taking over his boatbuilding shop off the Gorge waterway in View Royal. Walker had built many of Frank Fredette’s boats, who had been in turn an apprentice to J.J. Robinson, one of Victoria’s first shipwrights and Dorothy‘s builder in 1896.

The Walker/Knowles shop is a shipbuilding gem, having been built sometime in the 1940s, and it truly offers a fascinating glimpse into history. It’s also a bit of an anomaly since its the last remaining shop along the waterfront of that part of Victoria. There used to be a number of small boat yards on the harbour, and Ted’s is the last. More importantly, it is one of our last ties to the west coast tradition of the fisherman boatbuilder, who built and maintained his own boat in his own yard. There are a few of these guys left, but mostly they have turned to building.

Tony wanted to see this shop before it closes up forever:

As with many workshops, the way these spaces are set up, designed and the tools used in them tells a story. Some might even say these spaces reveal the soul of those who worked in them. This story means that much more when the shop is almost a century old and has gone through many hands and personalities.

When these shops are dismantled they reveal their hidden secrets; when they are demolished forever, that time in histroy is also erased. In this case, perhaps only this film recording will be the hard evidence of its existence, while the people who lived their lives in these spaces eventually fade along with the memories.

For me I love seeing these old shops: they teach me new ideas – which are only past ideas rediscovered and developed in a different era, when things weren’t available on demand – and show me the resilience and ingenuity of the people from our not-so-distant past.

Ted graciously showed us around the maze of maze of tools, large equipment, wood he’s been collecting from around the world (Mahogany, Honey Locust, Pacific Yew, Douglas Fir), generators, saws, designs, glues, varnishes and every manner of paraphenalia related to boatbuilding that he had been unearthing and organizing for months. It is a beautiful, functional space, and it was a privilege to see it before it changes hands at the end of June.

After doing a good bit of exploring, Ted showed us the second gem we had come to see: a stack of beautiful 100-year old Teak from first growth Burmese forests (now Myanmar) that had been salvaged from the decks of the Union Steamship Cardena. Built in 1922, the hardworking, reliable S.S. Cardena provided marine service up and down the British Columbia coast for 35 years, bringing supplies to the resource communities up the coast, and returning to Vancouver and Prince Rupert with canned salmon for export around the world.

She was decommissioned and sold for scrap in 1961, and Knowles rescued the precious teak from her decks for re-use. He felt some of the wood could be useful for Dorothy‘s restoration, because it’s the type of wood that would have been used to trim her in 1896 when she was built, and it was harvested in that era.

Ted is a very practical man, both when assessing the takedown of his historic shop, and the purposes and function of wood. He had this to say about using this wood on Dorothy:

“It’s not like,’Hey let’s throw a whole bunch of teak on Dorothy… because Dorothy isn’t a teak boat. It’s a boat that was built of native woods and built well and it’s lasted well, and it doesn’t need teak to be Dorothy. You don’t want to use teak as a pretentious geegaw or a flashy item, you want to use it for things that are really necessary, like maybe hatch slides. Or the top of a sliding hatch. Or companionway steps. Things where you touch, or you see, or you feel, and teak is appropriate for. It doesn’t have to be teak just because it’s teak.”

Thanks for the reminder, Ted: using the right wood for the right purpose is probably why Dorothy has lasted so long. I’m sure it’s a principle that Tony and the Maritime Museum will adhere to in her present restoration.

And thanks for the amazing tour of your historic shop. It’s one we won’t forget.