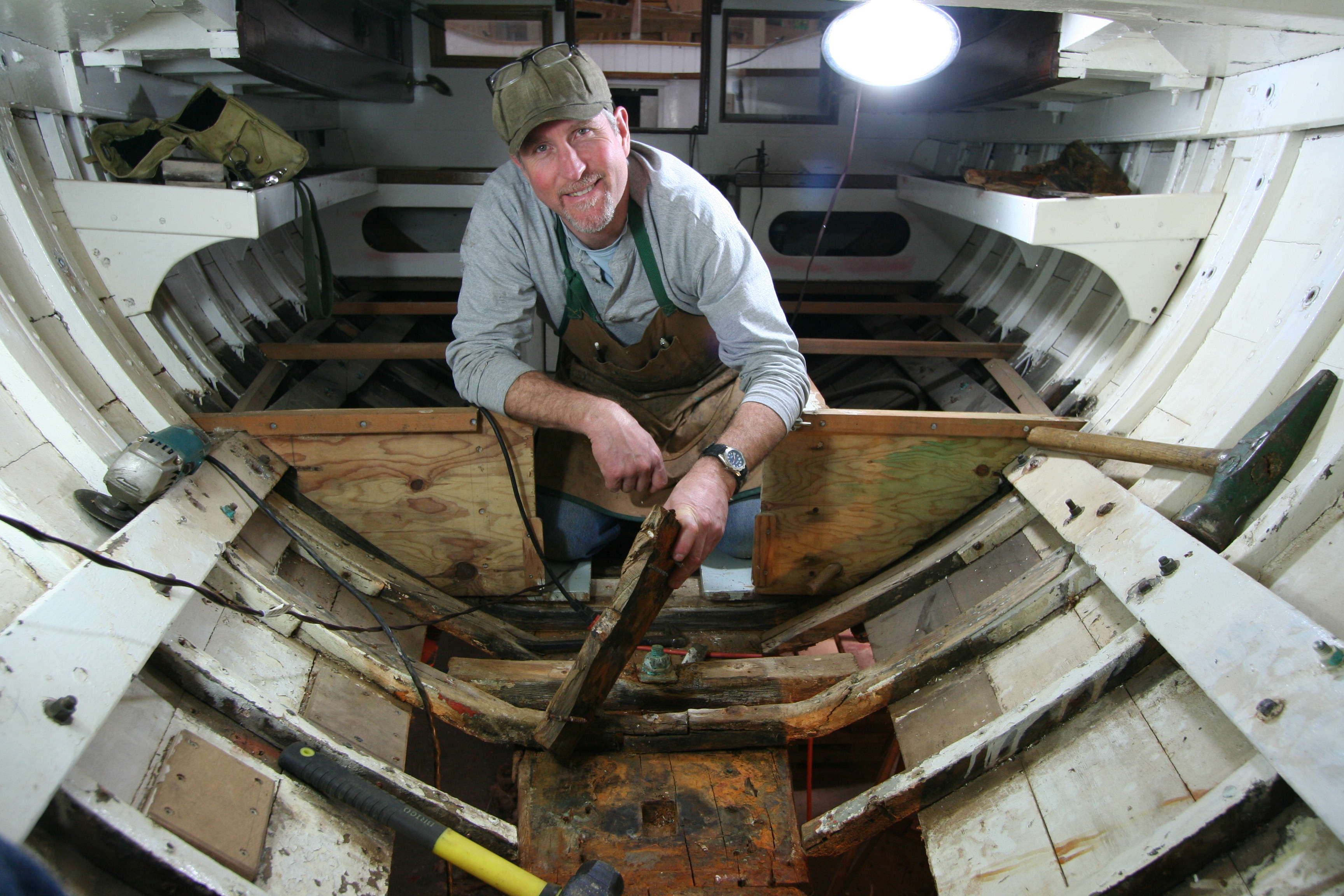 Replacing the first of Dorothy’s floors

Dorothy has been patiently waiting for attention in Tony Grove’s magical woodshop for some time. At last, other work being cleared away, the boatbuilder could begin on her stem/keel and floors, cutting away the 117 year old wood and fastenings, and measuring new timbers and frames.

Filming this process was a bit difficult – or I’m frankly out of practice – because Tony works super fast (even with me slowing him down!) He moves from bow to bandsaw to sander to steambox to clamp station and back again while I’m still setting up my shot! Wonderfully challenging. So if you wonder why there’s a series of similar looking shots from the bow, it’s because I finally found a perch where he would keep coming back and I could observe him without getting in the way.

View from small hatch of the stem with keel bolt taken out. Her garboards were actually removed back in October 2012, a process we filmed on our first shoot for “Between Wood and Water”.

Here’s a series of images that hopefully will give you the “1000 words” behind the story. If anyone has any technical questions, Tony will do his best to answer, but as he’s still in the middle of researching, some answers will take a bit longer to get to. But please do write and comment! This is a great time to ask questions because it will inform us a bit on what you want to see in the documentary…

Tony expresses his shock at how little is holding Dorothy together….. OK, not really. He was mostly trying to scare me, saying the bow would crack under my weight as he took out these frames! Yikes!

There is barely room for two of us in that bow – Dorothy is very narrow up forward, and this wide-angle lens makes her look beamier than her actual 10 feet.

Tony has just ripped off the mast step, which was covered in epoxy, which made it suspect, but it was actually ok. At least it’s clean now.

Now we can see how the floor timbers fit together

This old bolt just popped out (which is not supposed to happen). Tony thinks it’s galvanized steel and is original to the boat. It’s been eaten away pretty badly as you can tell, it should be about twice as long.

This is where the bolt was…

This bronze keel bolt is actually in pretty good shape, still has thread but the wood timber its supposed to be holding in place is completely gone.

This was the wood around the keel bolt, now obviously broken down due to electrochemical decay. Here with the new oak timber that will replace it.

So this is where it’s complicated – or can be. Building new frames and floors for Dorothy requires taking so many angles into consideration, Tony was scribing, measuring, considering, sawing, sanding for a good half hour for each. It was fascinating to watch/film, because he would spend all this time simply looking, analyzing, running the shape through his artistic/boatbuilder brain, and then fly into action and 20 minutes later… the pieces popped into place like they grew there – the first time! Amazing to watch him in action.

The old rotten frame coming out. There was almost nothing holding them to the stem/keel.

And then it’s necessary to keep testing them in place. This back and forth could take all day, but was relatively short this time around. Thankfully for the filmmaker and hungry boatbuilder!

The piece on the right (port) will sister the frame going across the floor, which was steamed and bent yesterday. These two sister/side pieces popped in for an exact fit – nice when that happens!

And then who doesn’t know how clamps work? Not much to say except they are pretty essential to any boatshop, as I’m learning. As I posted yesterday, Tony has about 50 in his shop, but could always use more. And someone on Facebook responded by saying “there are never enough clamps”. I guess it’s a universal thing…

That about wraps our little inside look at the floor timber/frame restoration process. Lots still to come. Tony will be working on Dorothy throughout the summer, aiming to get her back in Victoria for re-rigging by Fall. So there will be frequent updates here, watch this space!

On the weekend I will post more about the Tony Grove special… a steambox that is portable and won’t break your bank!

Cheers, happy sailing (and restoring and refinishing and varnishing and polishing… )

Tobi and Tony and Dorothy